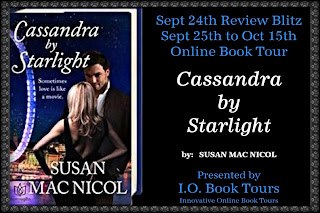 Welcome to my stop on Susan Mac Nicol's Blog Tour for Cassandra by Starlight.  Susan was kind enough to prepare a guest post for us today.  Please make sure to comment below and enter the Rafflecopter as Susan will be giving away 10 eBook copies of her book during her tour. 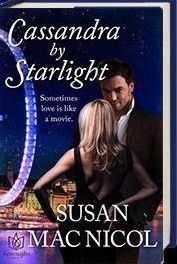 A London woman is swept off her feet into the glamorous yet surprisingly dangerous world of an up-and-coming star of stage and screen.TO CATCH A RISING STARUnconventional though she may be, Cassandra Wallace leads the life of an average Londoner, from blind dates to rush hour traffic. Then, along comes Bennett Saville. Charming, erudite, the up-and-coming actor is like the hero of a romantic movie. He sets Cassie afire like he has the stage and screen, and defies the tragedy that brought them together. From the tips of his Armani loafers to their scorching hot first kiss, he’s perfect. Only, he’s ten years younger and from the upper class, and those emerald eyes invite dangerous secrets. The world is full of hungry leading ladies, and every show must have its villain. Yet a true romance will always find its happy ending.


“Cassie?”
The voice came from behind her. She turned slightly to see the tall figure of a man to her right.

“Bennett?”
He smiled as he sat down in the chair opposite her. She had to admit, he was as stunning as her sister had said. He was just over six feet, thirty-seven years old according to Google, with dark brows, shoulder-length curly dark auburn hair and deep green eyes. He had a generous mouth that looked as if it was meant to be kissed. She felt a sudden shock at this thought. She wasn’t usually so fanciful.
“Forgive me if I don’t stand up,” she motioned to the crutches. “I haven’t mastered the art yet and people seem to be picking me up all the time which is a nuisance.”

He laughed, a rich chuckle that sounded as sexy as hell.

Oh my God! Cassie, my girl, she thought to herself in dismay over her reaction. What the hell is wrong with you?

“Your sister said you were feeling better. I can see she was right.”

He had a voice that was essentially very upper class, yet seemed to sound like melted chocolate. Cassie could almost feel herself blush at the random thoughts racing through her head. She leaned forward to look into his face.

“I’m so sorry about the loss of your brother. I wanted to thank you for your interest in how I’ve been doing, but you didn’t really have to do anything. It wasn’t your fault at all, so I wouldn’t expect you to carry on if you didn’t want to. I’m sure I’ll be fine.”

Cassie stopped suddenly, aware that he was watching her with a quizzical expression and realising she was rambling on like some inane madwoman.

Bennett thought Cassie Wallace was charming, her openness a real treat. She was about five foot four, with reddish blonde hair just reaching to her shoulders. She had delicate features and an almost elfin face. She looked much younger than her forty-seven years, a fact he’d managed to entice from one of the nurses for an autograph and a cheeky grin. She had a figure like a Rubens painting, full and rounded. Even with the faint bruising and the scar on her cheek, she looked like a woman who knew who she was and had come to terms with it. He liked her sense of humour.
**********


Sue Mac Nicol was born in Headingley, Leeds, in the United Kingdom. When she was eight years old her family emigrated to Johannesburg, South Africa. One day, after yet another horrific story of violence to friends, they decided it was time to leave. In December 2000 they found themselves in the Arrivals area at Heathrow and have stayed in the UK ever since, loving every minute of it.

In between her day job as a regulatory compliance officer for a financial services company in Cambridge and normal daily life, the inspiration for the Starlight series was born; Sue’s characters, Cassie and Bennett, finally made their debut onto the flickering screen of a laptop and gave her the opportunity to become a published author—a dream she’s had since being a young girl old enough to hold a pencil.

Sue is a member of the Romance Writers of America and the Romantic Novelists Association in the UK. She lives in a town house in the rural village of Bocking, Essex, with her husband of twenty eight years, Gary (who believes he deserves a long service award for putting up with her for so long), two children, Jason, 24, and Ashley, 19, and a mixed collie mongrel called Blu.

a Rafflecopter giveaway
Posted by Maria at Tuesday, September 25, 2012