I can't wait for Kresley Cole's debut young adult release, Poison Princess, the first book in her series Arcana Chronicles.  What could top a new release from Ms. Cole, you ask?  How about a great contest?  Kresley  has outdone herself with a wonderful "Spread the Love" contest.  Check out the details below. She could save the world—or destroy it.

Sixteen year old Evangeline “Evie” Greene leads a charmed life, until she begins experiencing horrifying hallucinations. When an apocalyptic event decimates her Louisiana hometown, Evie realizes her hallucinations were actually visions of the future—and they’re still happening. Fighting for her life and desperate for answers, she must turn to her wrong-side-of-the-bayou classmate: Jack Deveaux.

But she can’t do either alone.

With his mile-long rap sheet, wicked grin, and bad attitude, Jack is like no boy Evie has ever known. Even though he once scorned her and everything she represented, he agrees to protect Evie on her quest. She knows she can’t totally depend on Jack. If he ever cast that wicked grin her way, could she possibly resist him?

Who can Evie trust?

As Jack and Evie race to find the source of her visions, they meet others who have gotten the same call. An ancient prophesy is being played out, and Evie is not the only one with special powers. A group of twenty-two teens has been chosen to reenact the ultimate battle between good and evil. But it’s not always clear who is on which side….

Sterling, Louisiana
The night before the Flash

“This is creepy,” Mel said as we waded through dried-out brush near the abandoned mill on my farm. Again I wondered why my boyfriend Brandon had chosen this remote place for a late-night kick-back with a few couples.

Mel and I had driven as close as we dared in her Beamer, then started walking into the withered woods. The fog was so thick I could barely see where I was stepping. Another of my grandmother’s sayings surfaced: Be wary of droughts—snakes slither about. “This was not my idea, Mel.”
POISON PRINCESS SPREAD THE LOVE GIVEAWAY

Grand Prize: Apple iPad
Runner Up: eReader of your choice 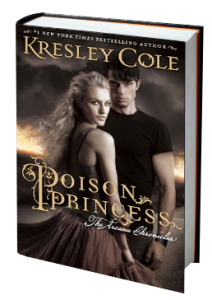 Here is how to enter:

1. post about POISON PRINCESS on your webpage, Facebook, MySpace, blog, etc, and provide us with the web address.

2. post the POISON PRINCESS countdown widget on your blog or webpage. Found here: http://www.thearcanachronicles.com/spread-the-word/
3. post reviews for POISON PRINCESS on sites like Amazon, B&N, etc, then send us the link or a screenshot.

4. attend one of the POISON PRINCESS Book Tour stops and take a pic.

Other examples of book love....
--Recommend POISON PRINCESS in a forum you frequent and take a screenshot. The image is your entry.

--Provide proof of purchase for POISON PRINCESS (minus the personal details). You can pre-order here: http://www.thearcanachronicles.com/books/

--Create a homemade bumper sticker or graphic about your favorite Arcana character. Take a picture to use as your entry.

These are just suggestions--use your imagination to come up with more ways to win!

Where to send your web addy or images?
Email: contest@kresleycole.com

The iPad winning entry will be chosen at random. The eReader will be awarded to the most fun and original example of book loveage.

Rules:
1. International entries welcome. If you receive mail, you can enter.
2. We encourage multiple entries.
3. Keep it fun; keep it clean; keep it within the laws of your country of residence.
4. If you decide to post a recommendation in a forum, make sure you abide by any forum agreements (don't get yourself banned or kicked off for this contest).
5. Entry into the contest grants us permission to list your name as a winner.

Good luck and thank you for spreading the love!