Book Blitz & #Giveaway for Dead In A Dumpster by B.L. Blair

Welcome to my stop on the Book Blitz Tour, presented by Book Partners in Crime, for Dead in a Dumpster by B.L. Blair.  Please leave a comment or question for B.L. to let her know you stopped by.  You can enter her tour wide giveaway by filling out the Rafflecopter form below. 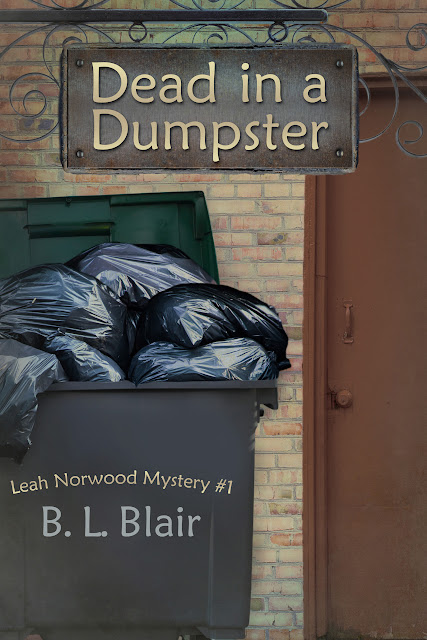 When Leah Norwood finds the body of Isabel Meeks in the dumpster behind her store, she can’t believe the police consider her a suspect. Sure, she didn’t liked Isabel, but then again, neither did anyone else. Isabel had a condescending attitude and a bad reputation. As manager of the antique store, Patina, she had made a lot of enemies.

There is Patina’s assistant manager, the handsome and charming Trent. Isabel was blackmailing him. There is Patina’s owner, the aloof and influential Anthony Thorpe.  Isabel was smuggling drugs through his store. And there is the entire drug dealing Cantono family. Isabel had lost a box containing heroin from one of their shipments. That is just to name a few and didn’t even include the stranger who was seen arguing with Isabel just hours before her death.

The police have too many suspects and too many soft alibis. Leah needs to prove to the sexy new chief of police that she had nothing to do with Isabel’s death.

Leah loves a good mystery. Can she find the killer before the police arrest her for murder?

We were standing by the dumpster and trying not to look at Isabel.  I don’t think Keith had ever seen a dead body either because the look on his face made me think he wanted to follow in my footsteps – scream, run into the nearest building, and lose his lunch.  But the kid was made of sterner stuff.  My estimation of him rose as he held his ground and questioned me.

“What were you doing out here?” he asked.  Okay, so my estimation of him fell a little.  I glanced at the trash bags sitting at our feet and tried to keep my voice even as I answered.

“I was taking out the trash.”  I don’t think I succeeded as he looked at the trash and then flushed.

Now I felt bad, like I had kicked a puppy.

“Cisneros.”  A deep, smoky voice cut through the night.  Both of us jumped and then turned toward the voice.  Keith’s car was parked nearby, and his front lights were illuminating the vicinity around the dumpster.  With the lights from the nearby stores, it was a well-lit area.  From the shadows, a figure emerged.  If I had any nerves left, I might have been a little anxious.  The man walking toward us moved like a stalking panther.  Smooth, long strides that ate up the space.

He was breathtaking.  Not gorgeous or handsome but there was a power about him that drew the eye.  He wasn’t exceptionally tall, standing about five eleven, but his shoulders were broad and his hips narrow.  There wasn’t an ounce of fat on his lean, hard body.  Dark hair cut short in a military style, covered his head.  His face was attractive in a timeless way.  Chiseled and clean-shaven but with just a hint of a five o’clock shadow.  He had a small indentation on the right side of his mouth that was trying very hard to be a dimple.  It was as if he was willing it not to appear with the strength of his personality alone.  He had intense green eyes that swept over me briefly before settling on Keith.  He was dressed casually in blue jeans, a dark t-shirt, and a navy sportcoat.  He had to be freezing, but it certainly didn’t show.

He looked familiar, but I knew we had never met.  I would have remembered him.  He wasn’t the type of man you would ever forget.  I searched my brain for a name to go with the face but came up empty.  He stopped between us and turned to Keith.  “What have we got?”

The kid stood straighter.  I guess the man was his supervisor.  Although he didn’t look much older than I did, his physical presence alone commanded authority.  Keith answered quickly while consulting his notes.  “Victim identified as Isabel Meeks.  Gunshot wound to the chest, close range.”

The man looked at Isabel still sitting where I found her.  He leaned closer.  “Looks like a Glock 9mm.”

I was impressed.  He was able to identify the type of gun by looking at the body.  I owned a Glock and also knew what type of bullet hole it made, but I would have never been able to tell by looking at Isabel.  Keith nodded and then looked back at his notes.  “She was found about seven fifty p.m. by Ms. Norwood.”

Keith pointed to me, and the man turned his eyes to mine.  His gaze swept down my body and back up.  He then dismissed me without a second glance before turning back to the rookie.  “Has the ME been called?”

Now, I know that I am not the most attractive person in the world.  I am what most people would call average.  Average height, average weight, average looks, but being dismissed so completely really pissed me off.  I was cold, wet, tired, and quite frankly, still a little queasy.  And it had been a really bad day.  The two men were in deep conversation about the medical examiner when I interrupted.

Both of them turned toward me.  Keith seemed a little surprised that I was still there.  I guess he had forgotten about me.  The other man just seemed irritated that I had interrupted him.

“You found the body?” he asked and then continued when I nodded, “We’ll need to ask you some questions.”

Keith had been asking me questions.  My nerves were shot and my temper short.  I am not usually such a bitch, but I had enough of standing out in the freezing rain.  I probably shouldn’t have mouthed off to a police officer, but I figured my day couldn’t get any worse.  I summoned up my inner diva, gave him my most haughty look, and asked in a snooty tone.  “And you are?”

He stared at me a minute, his eyes hard and unyielding.  He raised his eyebrows just a notch, pulled out a badge, and held it toward me.  “Chief of Police Alexander Griggs.” 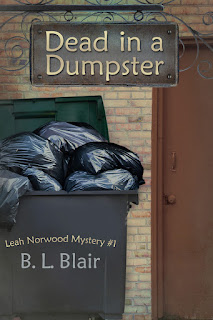 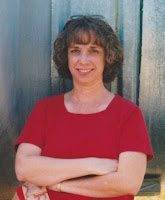 B. L. Blair writes simple and sweet romance and mystery/romance stories.  Like most authors, she has been writing most of her life and has dozens of books started.  She just needs the time to finish them.

She is the author of the Holton Romance Series and the Leah Norwood Mysteries.  She enjoys reading books, writing books, and traveling wherever and as often as time and money allows.  She is currently working on her latest book set in Texas, where she lives with her family.