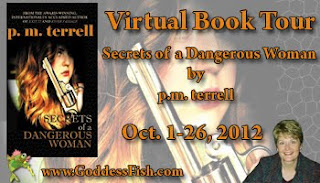 Welcome to my stop on P.M. Terrell's Secrets of a Dangerous Woman Virtual Book Tour.  Ms. Terrell was kind enough to prepare a guest post for us today.  Please be sure to leave a comment or question for her below as she will be awarding a $25 Amazon GC to one randomly drawn commenter during her tour.  The more often you comment, the better your chances at winning.  You can follow her tour here.

Can Reading Stop a Crime?

It was almost ten years ago when I sat down with Waynesboro, Virginia Police Officer Mark Kearney to discuss crime over a leisurely lunch. I’d known Mark for a few months; we met while I was signing books in Staunton, Virginia. I had pledged part of my book proceeds to Crime Solvers and Crime Stoppers throughout Virginia and Mark was the police liaison to the Central Shenandoah Crime Stoppers.

As we discussed factories closing, leaving people without work and despondent, I also heard that drug use, burglaries, robberies and other crimes were on the increase. But the police departments were struggling with reduced budgets in a time when they needed more funds to fight crime. I made the comment that if I could raise a little bit of money for Crime Stoppers, just think what we might do if we got together five or six authors to raise money for anti-crime measures.

That conversation took Mark and me on a path of exploration, which would ultimately end in the discovery of a link between high crime rates and high illiteracy rates.

I would find out through the Department of Justice, the Bureau of Labor Statistics, state and local law enforcement, and even UNICEF how intertwined illiteracy is with growing crime rates.

I would learn that 85% of all juveniles in United States Juvenile Courts are functionally illiterate.

When you consider the adult inmate population, 60% of inmates are functionally illiterate. It is worse among men than women, where 3 out of every 4 male inmates cannot read beyond a third grade level.

Most inmates are not in prison for life. They will get out and they will be walking our streets, living in our neighborhoods and living out their lives in our communities. If a male inmate leaves prison struggling to read what a fourth grader is mastering, what type of work can he expect to get? What type of future would he expect to have?

As a result of these statistics and more, Mark and I founded The Book ‘Em Foundation. The purpose is to raise awareness of the link that exists between high crime rates and high illiteracy rates, as areas in the country that have worked to increase literacy rates have—sometimes unexpectedly—also reduced their crime rates. It isn’t surprising; those with high school diplomas qualify for more jobs than high school dropouts. Those with at least some college can expect higher earnings than those without any college. College degrees, especially advanced ones, open doors that would always remain closed to those without higher education.

For ten years, we have sponsored book fairs: first in Virginia then in New Hampshire and this year we had our most successful one to date in North Carolina. Book ‘Em North Carolina Writers Conference and Book Fair was a one-day event that brought together more than 75 authors and publishers who spoke on panel discussions and in solo talks about writing and the publishing industry. The event was free and open to the public and more than 2,000 people attended from as far away as New Jersey and Florida. Our headliners were New York Times bestselling authors Carla Neggers and Michael Palmer.

Our next event will be on Saturday, February 23, 2013 in Lumberton, NC. We’ll bring together more than 75 authors, publishers, book promoters and literary agents—and one awesome Hollywood producer, who will discuss turning books into movies. For more information, visit. www.bookemnc.org. It is our goal to bring in even more money to raise literacy rates and help all citizens work toward better futures. 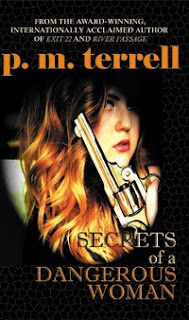 SECRETS OF A DANGEROUS WOMAN
By
P.M. Terrell

In Secrets of a Dangerous Woman, Dylan Maguire is back in his first assignment with the CIA: to interrogate recently captured Brenda Carnegie. But when she escapes again, it's obvious she's had help from within the CIA's own ranks. With Vicki Boyd's assistance, Brenda is back in Dylan's custody. And now he must find out why some in the highest levels of our government want her dead while others are willing to risk everything to help her. And when he discovers Brenda's real identity, his mission has just become very personal.

Dylan and Sam stood in the wide, hushed hallway as they observed the interrogation room through the one-way mirror. Inside was a metal table in the center of the room with empty chairs on one side. Against the far wall was a counter that ran the length of the room, comprised of a sink and cabinets above and below the stainless steel counter top.

But it was the single chair on one side of the table, the side closest to Dylan and Sam that riveted their attention. The metal chair was arranged so they viewed the occupant from the side. The ankles were cuffed to the slat at the bottom of the chair while each wrist was cuffed to the chair arms. Thick copper hair hung in waves that reached to the person’s waist and obscured the face.

Sam crossed his arms in front of him. “Not this one. She’s not even close to breaking.”

“Ah, a Scottish name…What is it you want me to do with ‘er?”

“Keep her awake, for starters.” He glanced at him. “It should be good practice for you. Use some of those interrogation
techniques they taught you.”

“What is it you want to know?”

“Who she works for,” Sam said as he picked up a handset beside the one-way mirror.

“Who are you running from?” Vicki asked.

Brenda took a deep breath. “I am in trouble. Big trouble.”

“Depends on who you ask.” She took a deep breath. “I’m tired, Vicki. Really tired. I need to get off the street. Stay inside for a day or two. Regroup.”

“I’m living in Lumberton now. The woman who owned the house where I’m staying passed away. Her nephew inherited it.”

Her eyes narrowed. “Yeah? Where’s he?”

“I live with him. Come home with me. It’s a big house, three stories.”

Brenda frowned as if she was deep in thought. “It’s just you and him there?”

“His name’s Dylan. I’ll tell you all about him on the way.”

She half nodded. “He won’t be taken aback by you bringing me home? I’m a bit more to handle than a stray cat.”

Vicki blushed. “He’s got a strong sense of family. Besides,” she said as she started to rise, “it’s suppertime and you need to eat. We’ll get something in your belly and you’ll get a good night’s sleep.”

Brenda hesitated only briefly before she rose from the table. “You sure you can handle the intrusion?”

As they made their way toward the door, Brenda whispered, “I wouldn’t be too sure about that.”

Brenda was taller than her sister. His chest touched her back as he leaned on the door, her hair brushing against his face and flowing downward nearly to the top of his jeans. She smelled of Vicki’s shampoo and Vicki’s perfume.

“Where the bloody hell do you think you’re goin’?” Dylan said.

She didn’t answer but continued facing the door.

“Put the gun down, Red,” he said calmly.

“Since you remember me,” she said, still with her back against him, “you know I didn’t have a gun.”

“I know that you’ve got me gun in your right hand. And I know as soon as you turn around, that gun is goin’ to be pointed at me chest.”

“There are two things I won’t be allowin’ to happen. First, you’re not gonna shoot me with me own gun. And second, they won’t be catchin’ you with me gun on you. They won’t be tracin’ you back to me.”

She remained motionless and he could almost hear her mind racing. “I’m bad news, Irish. You and I both know it. It’s
better this way.”

“What are you saying?”

“I’m turning around,” she said after a moment’s hesitation. “And I’m handing you the gun.”

He moved slightly away from the door, dropping his arms from around her head as she turned around. He took the gun from her hand and set it on the kitchen table beside them.

“I wish I’d met you before she did. We would have been good together.”

His eyes followed her jawline, her full lips, a slightly wide, upturned nose, her high cheekbones, and a mountain of copper hair a man could get lost in. Then his eyes moved to her perfect brows, one raised slightly, coquettishly, before stopping to peer into her mesmerizing amber eyes. “We would have been dangerous together.” 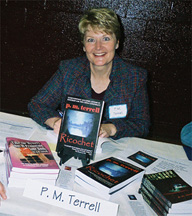 P. M. Terrell is the award-winning, internationally acclaimed author of more than 16 books, including Vicki's Key, a 2012 International Book Awards finalist, and River Passage, 2010 Best Fiction & Drama winner. She is the co-founder of The Book 'Em Foundation whose slogan is "Buy a Book and Stop a Crook" and the co-chair of Book 'Em North Carolina Writers Conference & Book Fair. For more information, visit www.pmterrell.com.

Please be sure to leave a comment or question for P.M. below to enter her $25 Amazon GC giveaway.  You can follow her tour here.  The more often you comment, the better your odds at winning.
Posted by Maria at Wednesday, October 03, 2012